You are here: Home / Life Lessons / Simplify Your Life. Today. 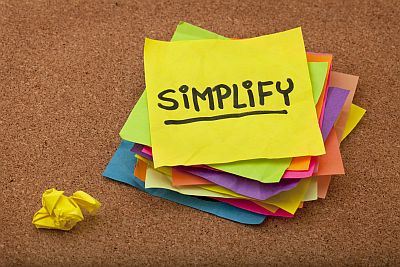 Why does simplification have to be so complicated? Does the idea of simplifying seem overwhelming? “Where would I start? What do I need to do? Should I take a class or hire a coach? I don’t have time to simplify!”

Stop it! Simplifying is easy. You don’t need to implement big systems to make things simpler, you need to pare down.

Don’t overthink it. Just choose one of the following ideas, and do it today. It doesn’t matter which one. If one of them jumps out at you, do that one. Or just close your eyes and point to one. Or start with the first one, and work your way down the list doing one every day. Whatever gets you moving in the right direction.

Take one thing off your to-do list. No, I don’t mean do something on your to-do list (although getting things done is a good thing). Our simplification step is to just remove one thing from the list without doing it. Do you have things on the list that have been there since the last millennium? You don’t want to do it, you aren’t going to do it, so stop pretending. Take it off the list and stop feeling guilty for not doing it. It clearly isn’t important, or you would have done it by now.

Quit something. Is there something you do that once seemed like a good idea but now is something you dread? Maybe you belong to a club or a team, or you are on the board of your professional association or you somehow got put in charge of handling something you hate doing. Stop. Today. Tell whomever you need to tell that you don’t have the time and you quit.

Delegate something. Is there something that could be done by someone else? Find someone and get it done. If you don’t have an assistant or other staff to whom you can delegate, look for help elsewhere. Get someone on Fiverr.com to write a blog post for you, or use TaskRabbit.com to choose someone who can organize your office, run errands or do other things that will free up your time.

Do one really important thing. Now that you have gotten rid of the unimportant stuff, do one thing that matters. Work on a project that will generate income, do something that has a deadline approaching, or do whatever is most important.

Don’t multitask. Do only one thing at a time. You think you get more done when you multitask, but it is an illusion. Multitasking causes your brain to constantly shift from one thing to another, and each shift slows you down and makes you less productive. Choose one thing to work on, and work on only that task until it is done. If it is a bigger project than you can finish in the time available, work on it for a set amount of time (e.g., 45 minutes) then put it aside and move to the next project.

Get rid of ten things. The more stuff you have around you, the more complicated your life is. Choose ten things you can give away or throw away, and get them out of your way. I keep a “giveaway box” nearby, and whenever I discover something that should be donated, it goes in the box. Stuff that can’t be donated goes directly into the trash or recycling bin. Start clearing away the clutter by getting rid of ten things. Of course, tomorrow you could get rid of another ten, and then another and another…

Find an extra 30 minutes. Don’t have time to simplify? Sure you do. Skip the meeting you don’t really need to go to. Spend less time on Facebook or Pinterest. Don’t check email every five minutes.

Slow down. Just as with multitasking, moving fast makes it seem that you are getting more done. The stress and frenzy, though, work against you. Breathe. Don’t rush. Work at a comfortable pace.

Create a conscious routine. Routines simplify things because you don’t have to think about what to do, you can just do it. However, it is easy to fall into a routine that includes unnecessary tasks. Establish routines that make the best use of your time and don’t do things that don’t need to be done, just because you have always done things that way.

Simplifying can make your work both more enjoyable and more productive.