You are here: Home / Viral Marketing / When Going Viral is Enough to Make You Sick 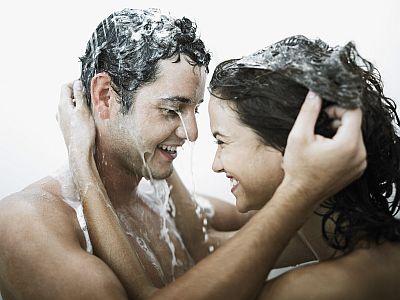 You know those commercials that everyone talks about but no one seems to remember what they are advertising? Here is a fictional look at one such campaign that goes viral, much to the chagrin of the advertiser. I got a kick out of it, and I hope you do, too. Mike, the writer, shares a bit of his fractured take on life at bikeswine.com.

Now the internet has brought about “viral marketing.” The idea relies on people to see something worth sharing in an ad and thus pass it along to their friends. This word of mouth advertising is free as opposed to the price of $4 million for 30 seconds of airtime during the Super Bowl.

A shampoo company hoped to advertise their new shampoo for couples by creating a viral video featuring a couple. The idea behind their product was that it was great for both men and women, thus it was only necessary to use one shampoo in the house. Unfortunately for them, the message somehow got lost.

This is followed by a scene where the bathroom mirror gets all foggy as the sound of the shower running and both the male and female giggling is heard in the background. Then viewers are presented the slogan: One Bottle, it’s great for men and women. Finally there is a shot of a smiling man and woman wrapped up in towels, exiting the bathroom.

The shampoo company’s mistake in their zeal to create something to get people’s attention was that they never mentioned that the product was a shampoo. They knew that their new product for men and women was called One Bottle, but they forgot to actually say what the product was for.

Even with this confusion there was a lot of viral exposure, however. People believed that One Bottle was meant to spice up a couple’s love life and result in exciting shared showers. Inquiries began to flood the company website as people wanted to know how One Bottle worked. Other people wanted to know about possible side effects and if it would be safe for people with heart problems.

As the video was shared more and more, it reached a level of public consciousness causing politicians to feel the need to weigh in on the product. Conservatives decried the implication of people making love on a commercial and stated that this should be kept away from children. Liberals complained that the couple in the commercial was not a minority and that once again the LGBT community had been overlooked.

Finally the FDA announced that it was looking into the product and asked that One Bottle be removed from store shelves until they could determine if it was a safe aphrodisiac. The man behind the failed viral marketing campaign was fired. He went home in disgrace and cried in the shower, using his ordinary shampoo formulated for men. If only he had a shampoo designed for couples so that his wife could join him in the shower…

Don't Do Today What You Can Put Off 'Til Next...