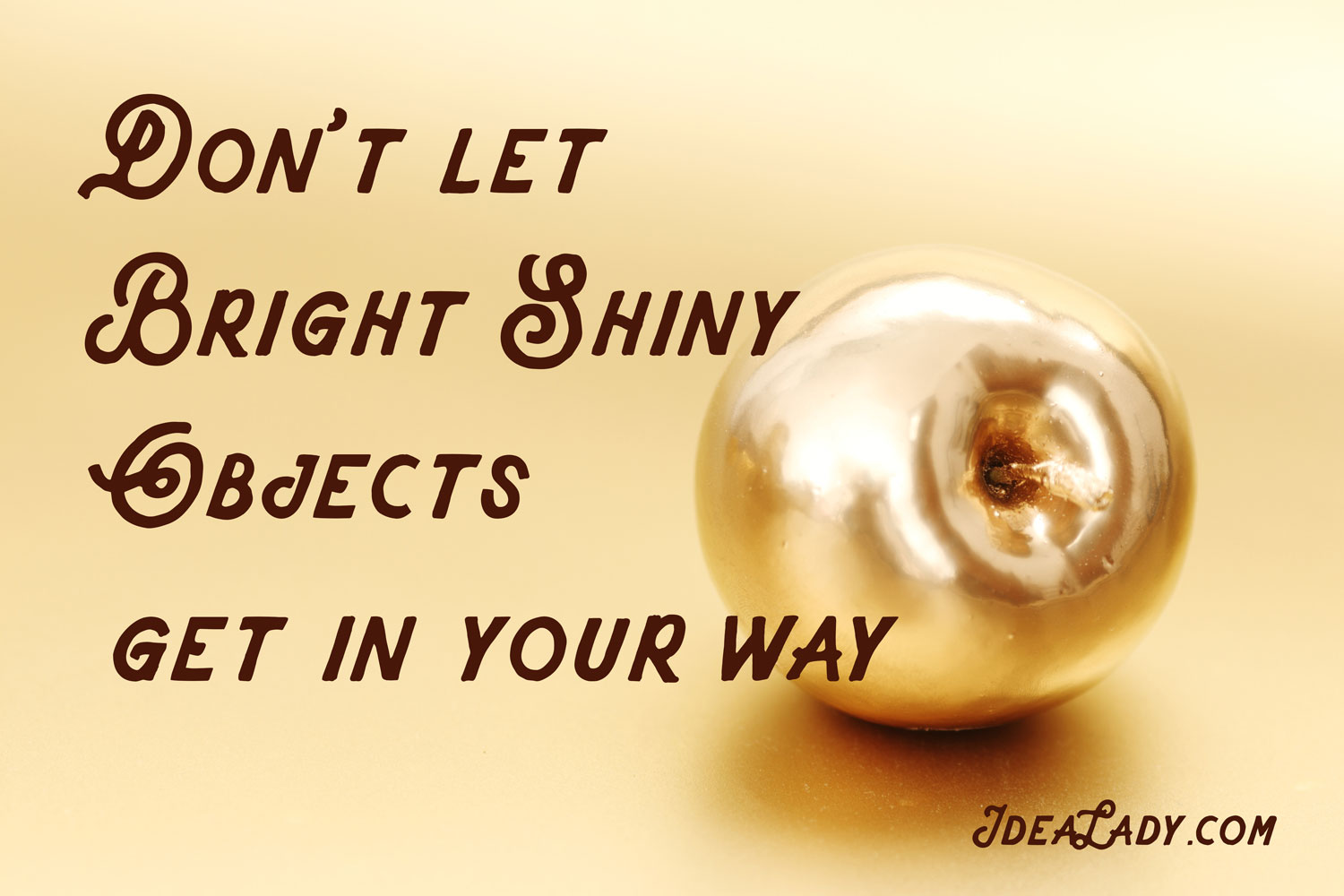 Bright shiny objects (BSOs) are the little things that glitter in your path as you move along in life. BSOs are usually more interesting than whatever you are currently working on because they are new and exciting.

Although many other traits in your power arsenal are also essential, I truly believe that focus is the driving force of them all.

It may not seem obvious how critical focus is to your success. What becomes obvious is what happens when you lack focus. You’re distracted from essential tasks. You become unproductive. You don’t get things done that need to be done. You spread your efforts over a variety of tasks instead of a few and end up working on a lot of things, but not getting anything done. You start feeling frustrated. You begin to believe that you can’t reach your goals, or you stop setting goals altogether, or at best you set simple goals that are easy to reach and not the “stretch goals” that can truly change your life.

Worst of all, the BSOs that contribute to your lack of focus cause you to feel unworthy of success altogether because you think that you aren’t capable of performing up to your capability.

You see, you are indeed capable of doing multiple things, but usually not at the same time unless they’re trivial tasks. If you try to do multiple important tasks at the same time, none of them will get done well.

Chase two rabbits… both will escape.

One reason that chasing BSOs is detrimental to your success is that it’s a common symptom of procrastination. You might actually be trying to sabotage yourself by procrastinating on a task because you secretly have a fear of success.

Hardly anyone ever admits to a fear of success, but it’s very, very common.

You might fear success because you don’t want to leave your comfort zone. You’ve lived your entire life doing things a certain way, with a certain income, a certain set of friends, your family has adapted to the lifestyle you’ve allowed them to become accustomed to, etc.

Getting out of that comfort zone exposes you to unknown results, so rather than focus on doing what it takes to change, you let yourself be distracted, delaying the task that you should be working on.

So you don’t change, and you’re comfortable… but you’ve sabotaged your personal progress.

Fear of success is much more powerful that a fear of failure because most people aren’t even aware that they have this fear, and will resist being accused of it. You can’t begin to change a habit that you’re unaware that you have.

Awareness is indeed half (or more) of the battle.

I remember the Pogo comic strip, which is quite likely well before your time, and one of the famous and so appropriate quotes was “We have met the enemy and he is us.”

Learn to be aware of who the enemy is, and root him out of your mindset.

What is it that you’ve been wanting to do, or wanting to learn, for years?

Maybe you want to learn Photoshop, PowerPoint or some other software program. Or you have been meaning to set up an autoresponder to start building and monetizing a list. Or perhaps you are one of those people who are going to write a book someday.

It isn’t that you can’t do those things, it’s that you haven’t focused on learning how to do them, and then actually doing them.

Focus and you’ll be able to achieve much more than you ever thought possible in ridiculously short amounts of time. You can do anything you want to if you focus on it.

Did you ever try to keep track of how much time you actually spend each day doing tasks that contribute to your progress, your success, your income?

I’ll bet if you did, you’d be amazed at how much time you’re actually consuming that does nothing to move you forward. You check emails, you chat on Skype, you check your Facebook feed, and you watch all the funny videos. Then you contact someone to share those funny videos with them.

And on and on it goes all day, until you reach the end, and you’re exhausted, and you haven’t accomplished much of anything at all.

That has to stop. You have to focus on the task at hand. You need to be accountable to yourself at least, and to an accountability partner if you want the ultimate boost. Telling someone you’re going to get something specific accomplished in a given day is a good way to force yourself to actually focus on that task.

A few months ago, a friend challenged me to do something that I had been thinking about doing. She had also been thinking about it, and she decided that a challenge would give both of us the kick in the butt we needed to get started. We knew it would be good for us, and we were right. We are both having more success with this new project than we expected. Yay, us!

Do you have a bunch of products and tools you have bought to help you business that are just sitting on your hard drive, collecting digital dust? Yeah, me too. I have started scheduling “Implementation Days” where I choose one of those abandoned products and start putting it to work.

The thing about focus is that it doesn’t have to be complicated. Just choose something you want to get done, then do it. Don’t accept excuses from yourself, don’t abandon it if it gets a little difficult and don’t complicate it. Just do it.